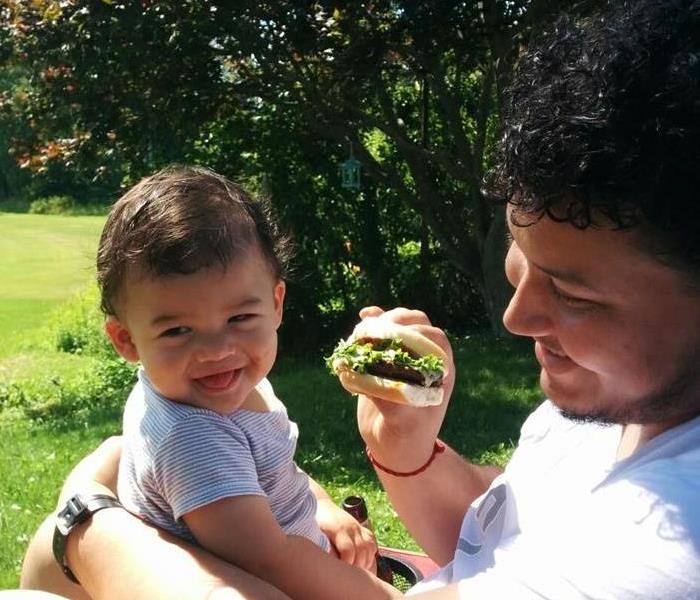 Junior enjoying the park with his daughter.

Junior Delgado has been part of the SERVPRO of Newtown & Southern Litchfield County team for 2 years. Prior to joining us, Junior worked in the security sector as a security officer for CBS and BET as well as in loss prevention for a sporting goods warehouse. He also utilized his handyman skills during this time by doing small home improvement jobs as a side job.

Junior was raised in the Bronx and attended elementary and middle school there. He had the unique opportunity to attend high school at Sagrado Corazon de Jesus in the Dominican Republic, which is where his family is originally from.  After high school, Junior returned to the Bronx and attended Hostos Community College of The City University of New York, where he studied criminal justice.

Junior's wife and kids are very lucky that he LOVES to cook – his favorite foods being pizza and Asian cuisine. He can often be found watching Anthony Bourdain cooking shows. Cars are another hobby of Junior's – with some of his favorite's being 1964 to 69 mustangs, the McLaren MP4-12c, the VW Phaeton and the AC Cobra.  He's a fan of  all of the NY sports teams as well as Las Aguilas Cibaeñas (Dominican baseball). Junior enjoys hiking and has visited many  state and national parks throughout the Northeast. His favorite place in the world is a huge mango tree in the middle of a field behind his grandfather's house in the Dominican Republic.

In his work at SERVPRO, Junior appreciates being able to work in different locations and helping people get their houses closer to normal. He's taken advantage of the educational opportunities available and has  earned his water restoration technician certificate and mold abatement license. His co-worker's and customer's appreciate the perpetual smile, easy going nature and positive attitude he brings wherever he goes.